Are you getting flowers and chocolate for your loved ones again this Valentine’s Day? Well, that’s nice… But hey, what if you brought them something different this year? Something that will last longer. Something like… SPEED

. Yes, how about accelerators that will let them download anything at EXTREME speed and watch any online HD video REALLY smoothly: Speedbit Acceleration Pack!

This Valentine’s Day we are offering a 75% discount on Speedbit Acceleration Pack – that’s two premium accelerators that will make you download lightning-fast and watch HD videos without buffering. Your loved ones won’t forget this gift… 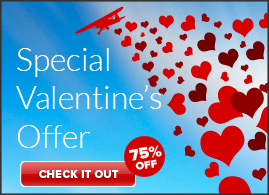 Enjoy downloading (music, videos and files) and watching HD videos at great speed.
Let’s face it – that’s what we do most of the day…

The Madness has begun with discounts of up to 85% on all Speedbit Premium accelerators. This is your chance to speed up downloads and significantly improve your online video experience at an amazingly low price! 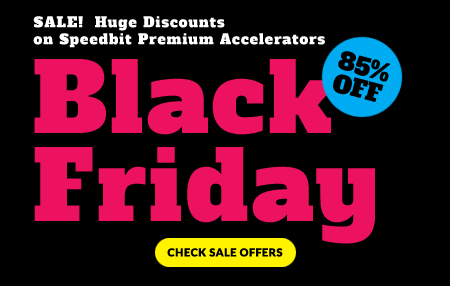 What are Speedbit Premium Accelerators?

Speedbit accelerators are based on a unique technology that maximizes the bandwidth available to you and makes your downloads and videos run as fast as possible.
There are two type of Premium Accelerators:

Download Accelerator Plus (DAP) Premium – offers extreme acceleration and extra download managing features. You don’t have to do anything special. Just keep downloading as you always do and DAP will automatically speed up your downloads. It’s fast and simple! Check out sale deals!

You might be surprised to know that without a download accelerator, you are more likely to make use of just 16% of your bandwidth (read more).

Without a video accelerator, you are likely to experience buffering problems that will make your videos get stuck and give you an irritating video experience (read more).

Put an end to slow downloads and video buffering
Get your 85% off on Speedbit Premium Accelerators Today!
(Sale ends Dec. 3rd)

It just so happens that September 23 is the birth date of some legendary figures of our times. Can you guess who? We gathered some videos of them for you, so let the fun begin! Make sure you have Speedbit Video Accelerator, so you can watch these videos smoothly, without any pauses or breaks.

Let’s start with some legendary Rock, R&B and Jazz musicians.

Did you know? Bruce Springsteen earned 20 Grammy Awards. His first Grammy Award was for Best Rock Vocal Performance on “Dancing in the Dark” in 1985*.

Did you know? Ray Charles recorded with ABC since 1959, becoming the first African-American musician to be given artistic control by a mainstream record company*.

Did you know? The St. John Coltrane African Orthodox Church, San Francisco, incorporates Coltrane’s music and his lyrics as prayers in its liturgy*.

Hard to believe that Bruce Springsteen, Ray Charles and John Coltrane were all born on the same day. One day, three legendary musicians.
Now, let’s turn to some historical figures… Did you know that Augustus Caesar (63 BC – 14 AD), the first Roman emperor was born today?

…and Kublai Khan (1215 – 1294, grandson of Genghis Khan), the fifth Great Khan of the Mongol Empire and founder of the Yuan Dynasty:

Now, for some funny stuff…
The TV actor Jason Alexander was also born today. Watch some of his funniest moments as George Costanza on the popular TV show, Seinfeld:

Master of His Domain: Best of George Costanza

And while we are on the topic of TV shows, here’s a funny parody of Springsteen’s “Born To Run” on The Tonight Show:

We are back with another great sale.
For the next few days (until July 8th) Speedbit is offering a 68% discount on Speedbit Acceleration Pack. This is an excellent opportunity to upgrade to Speedbit’s Premium Download and Video accelerators for only $24.95/yr (instead of $79.90/yr).

That’s 2 products for the price of 1:
Download Accelerator Plus (DAP) Premium – makes your downloads run fast and simple. It kicks in automatically every time you download, and maximizes your download speed. You don’t have to do anything special, just keep downloading as you always do. The Premium version provides EXTREME acceleration, and is packed with extra features that will help you easily manage your downloads. Check it out! 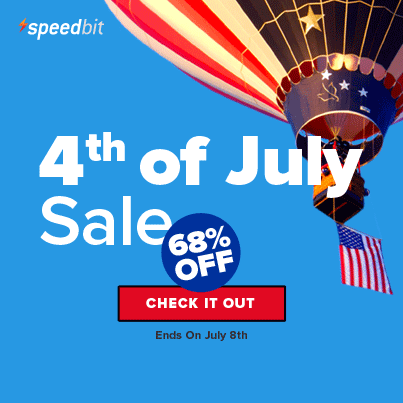 Well, because it’s worth it! Because it’s time to put an end to slow download speeds and video pauses that make your download and video experience so irritating. For the bandwidth you are paying for, you should be getting much faster and smoother results. That’s right! Without a download accelerator, you are more likely to make use of just 16% of your bandwidth – read more. Without a video accelerator, you are likely to experience endless buffering problems that will make your videos get stuck– read more.

Don’t miss out on this opportunity to upgrade your download and video experience:
Get your 68% discount today!
(Sale ends July 8th)

As you get ready for the opening match, you should also get acquainted with Speedbit Video Accelerator – It accelerates online videos and eliminates buffering (those unbearable pauses!), so you can enjoy watching the World Cup videos smoothly.
Did I mention it’s absolutely free?

Download Speedbit Video Accelerator and you won’t miss out on the best World Cup moments!

Downloading is simple. DAP makes it fast and simple. And YOU can make DAP extra fast and simple. Today’s post will teach you how you can configure DAP to best match your download habits. You’ll see how you can boost up your download experience and easily manage the files you download with just a few minor adjustments. Before we begin, make sure you have the latest version of Download Accelerator Plus (DAP). Now, let’s start off with a few shortcuts.

If you download videos a lot, you should get to know the Download Video shortcut button that is located at the top of DAP’s main window. This button is not only the easiest way to download videos, but it is also the fastest way to get your video in the format and quality that is right for you. When you attempt to download a video with the Download Video button, DAP fetches and displays additional file options for the video you chose to download. So even if your original link was a MP4 file, you may actually prefer to download a FLV file or another file with a smaller size. DAP gives you maximum options, so you download what you really want extra fast and simple. 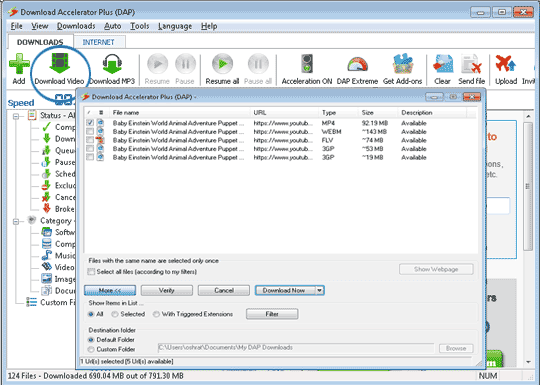 If you know you want your video in MP3 format, you can save yourself time by directly clicking the Download MP3 shortcut button located at the top of DAP’s main window. DAP will download and immediately convert the video to MP3. It will even add it to your iTunes library so you can easily access it anytime. 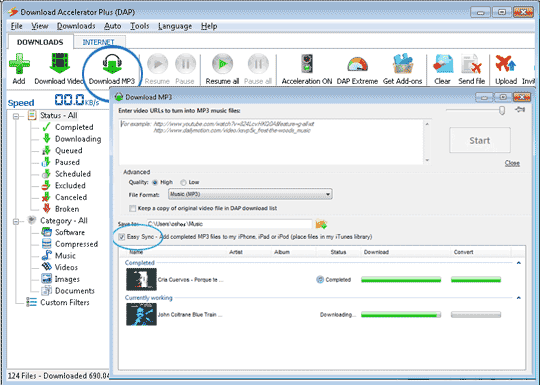 Sorting your downloaded files into categories will make it so much easier to manage files. So why not let DAP do it for you? Just click the Categorized downloading checkbox in DAP’s options window (Tools >> Options) and DAP will automatically sort your downloads into categories. You can use the existing categories or add new ones.

Learn how to automatically sort your files 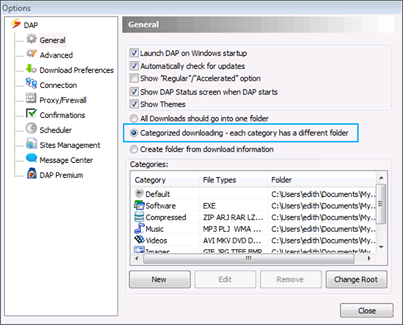 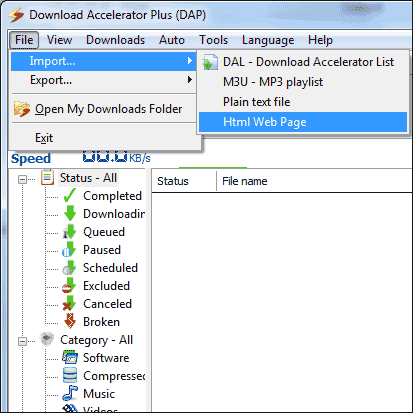 DAP accelerates your downloads so you can download your files as fast as possible. Now that you know these extra tricks, you can make DAP work even faster and easier.

Hey, do you know whose birthday it is today?
Hint: most famous picture – mad looking man with white hair and tongue sticking out.
Hint 2: E=MC2. That’s right – Albert Einstein was born 135 years ago today on March 14, 1879. The most famous scientist, no doubt, and with that picture in mind, perhaps also the basis for the stereotype of the mad scientist…

So what do we actually know about the man besides the fact that he was a great scientist? It’s quite amazing that even today (59 years after his death), there are endless videos about him floating around the web – educational, biographical, funny, very funny, not to mention hilarious videos… We gathered some of them for you so sit back and enjoy! Make sure you have Speedbit Video Accelerator, so you can watch these videos smoothly, without any pauses or breaks.

7 facts about Albert Einstein by JPD698

Ok, so we all know Einstein came up with the E=MC2 equation. But how many of you can clearly explain what it means? Take a look at this brilliant animated explanation by Eugene Khutoryansky, or settle for the short version by Animate Big. Make sure to download Speedbit Video Accelerator so you don’t miss all the great animation effects – it’s FREE!

Einstein’s Theory of Relativity – the short version by Animate Big

And one last video, just for fun…

Hope these videos help you enjoy your week! Have a great one!
Find anything you like? Learn how to download online videos with just one click!

Sending large files from your iPhone

Sending photos and videos have made it so easy to share the moment with friends and loved ones. We can no longer see a funny sign, a cute cat, a baby’s first steps without rushing to take a photo and sending it to our friends. Now that smartphones have made it so easy, we really can’t hold ourselves back. But what if your file is really large (like a video, 3D animation, presentation or other document)? It will bounce back- right? That spoils all the fun…And what if you have multiple files to share (vacation photos, school project, a series of documents)? Sending one by one is obviously NOT an option… and using a storage service is costly and time-consuming.

This is the time to get acquainted with the new FileFlyer App. It’s a free app that lets you send large and multiple files from your mobile devices using Speedbit’s popular FileFlyer service.

FileFlyer App lets you share your photos and videos as soon as you take them, without worrying about the file size. Everything is done directly from your iPhone or iPad so you can just shoot and send!

You can send files as large as 2GB! There’s no hassles attached – no registration, no configurations, and no need to buy storage space. It’s fast, simple, and best of all – FREE.

Once you upload your file, a download link is sent to your friends. They can then click the download link (or scan the QR code if they have the FileFlyer App) to download and view your file. 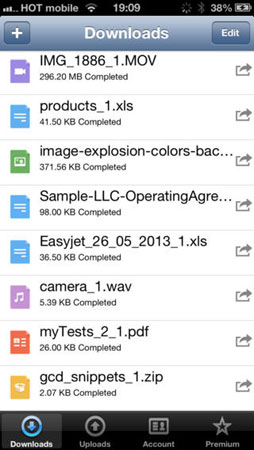